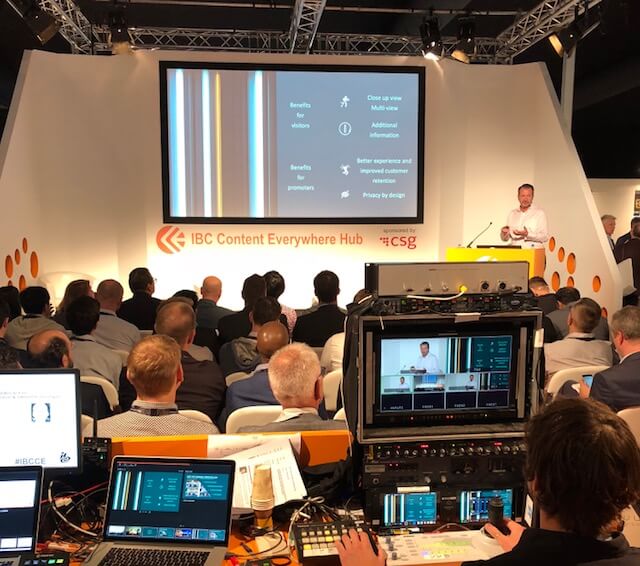 Liberty at IBC2018 – Day Two: A Scot and two aliens walk into a bar

Day two of IBC2018 kicked off in esteemed fashion with a welcome from the Mayor of Amsterdam, Femke Halsema, before attention turned to the main topic of the day’s keynote session – blockchain.

Buzzword? Hype? Ground-breaking technology? Well Kim Jackson, Co-Founder & President of Entertainment at SingularDTV, detailed how blockchain is being utilised by her business to empower content creators to retain control of their IP and evolve the entertainment industry.

Jackson explained that blockchain is essentially a public digital ledger of transactions, and that with a decentralised system in place you can create an ecosystem where everything is connected. It also, Jackson said, eliminates the need for an intermediary, thereby creating a peer-to-peer value chain and fair exchange process between creators, producers and buyers.

But how is blockchain being used in practice by content creators to do this? Well joining Jackson on stage was Maurice Schutte, Producer & Co-Creator of Space Beers, described as ‘an insane alien abduction film where beer is the only hope of survival.’ Brilliant.

Schutte explained how and why he and his team have used blockchain to tokenise the whole brand. He emphasised the importance of all financial supporters of the project (who purchase Space Beers Tokens) reaping the benefits of its (hopeful) success.

There were further blockchain discussions during an afternoon session in the IBC Content Everywhere Hub, as well as an in depth look into 5G. Andreas Westhoff, CEO of Smart Mobile Labs, talked a packed audience through a number of use cases his company has been supporting, including in Formula One, e-Sports, live music festivals and football.

However, he also highlighted that market adoption for 5G is a case of evolution not revolution, with full functionality likely at least three years away, and complete widespread network coverage realistically taking up to a decade.

In other news on day two, Maria Ferreras, VP Business Development for EMEA at Netflix, was asked if the over-the-top media services provider would be following the lead of Amazon and others and expanding into live sports.

While admitting “you can never say never”, Ferreras explained that ultimately there isn’t any value in Netflix doing so because they wouldn’t be able to do it any better than current broadcasters. As for the next chapter, Ferreras revealed that Netflix’s revenues are currently growing 43% year-on-year.

But as for Space Beers and a Scot vs two aliens in a drinking contest at an intergalactic bar, well I know who my money would be on.