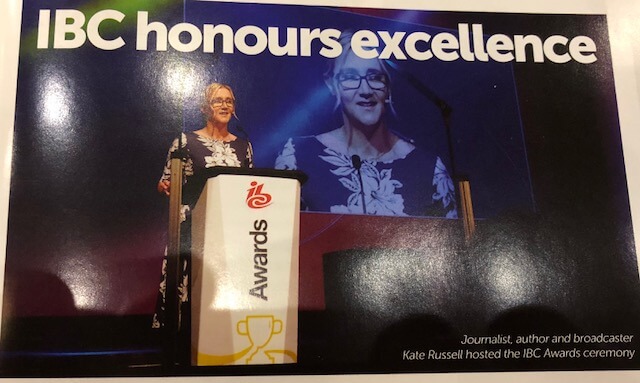 Liberty at IBC2018 – Day Five: The day after the night before

The main headlines to first emerge on the final day of the IBC2018 conference were focused around the big winners from the night before at the event’s prestigious Awards ceremony. The flagship International Honour for Excellence Award, as announced in the run up to the show, went to Joan Ganz Cooney, Co-Founder of the long-running and hit TV show Sesame Street.

In a video message broadcast during the ceremony, Cooney said she did not want to talk about her or Sesame’s Street legacy because “this is not over.” Other winners to be crowned on the night were:

Other discussions on day five included a conference session on public service media and the coming of age of AI and cloud-based workflows.

The panel included George Wright, Head of Internet Research & Future Services Section at the BBC, who told the audience that the broadcaster did not view as Netflix as a threat or as competition. He outlined that the BBC is in fact currently one of the OTT media services provider’s biggest suppliers.

Wright also recapped an amusing discussion he and the R&D team at the BBC had with the public broadcaster’s ethics team, when the question was posed on if footage that has been edited by AI can be held accountable for satire, sarcasm and parody. Answers on a postcard please.

When questioned on if increased use of AI at the BBC would see people losing their jobs, Wright was keen to stress that the opposite is in fact true. He revealed that while computers are being used in more incidences to help select the best shots to go out, it is a myth to think that this means people will be replaced in the process,.

Rather he outlined that the BBC produces 1,080 hours of content every hour and that AI requires more people rather than less; to train, analyse and supervise the systems. Ultimately, Wright said, the end goal is to provide viewers with a better shot or a shot that they have not seen before, and that these are not necessarily the same thing.

In one of the final afternoon sessions at the IBC Content Everywhere Hub, there was another discussion on one of the big topics of this year’s event – the convergence between the telecoms and media industries.

One of the key takeaways was a word of warning from Gilles Domartini, CEO of Cleeng, about what he called ‘content fatigue’. In other words, that producing more and more content might drive engagement, at least in the short term, but it won’t necessarily engender the most crucial aspect – customer retention.

And that’s a wrap for IBC2018. It has been five packed days of discussion, debate and collaboration at the world’s most influential media, entertainment and technology show. Thanks to all of the team at IBC for putting on such a fantastic show. Here’s to 2019!