Many of those who are old enough to remember the floppy disk will recall how revolutionary it was back in its day. But of course things change, and with a memory capacity of approximately 1.44 MB, the floppy disk eventually became obsolete in the fast moving and ever changing world of technology. Unlike its predecessor however, the USB 1.1 flash drive has become an omnipresent staple of office life around the world over the last 20 years.

Released in the summer of 1998, the USB flash drive was a revolutionary replacement for CDs and floppy disks. Small, portable, practical and with a large data storing capacity, the USB drive has many winning qualities.

Before the inception of the USB drive, one would have to carefully transfer a small file on to a floppy disk or a blank CD, find a safe and secure medium to carry and transport the device in, which usually was a carry case, and then finally transfer the data onto another computer – hoping it would work!

The USB drive is able to complete this at a much faster and efficient rate; and transportation is as simple as a handbag or a trouser pocket. Over the years, the memory storage capacity of the USB has gradually increased and now it’s able to carry data of up to 1TB in size, sometimes even more.

As with all technological innovations though, scrutiny will of course be placed on security. Due to its size and weight it is not that difficult to lose possession of, which could (and has in well publicised examples over the years) result in the loss of sensitive data. However, although not every USB drive contains built-in security protection, there are ample amounts of USB 1.1 drives that possess secure and encrypted security features.

Its importance may often be overlooked or simply underrated, but the USB is one of those devices that really has made a huge impact in terms of the way we share and transfer data. Here’s to another 20 years! 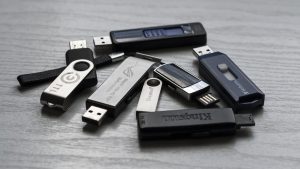