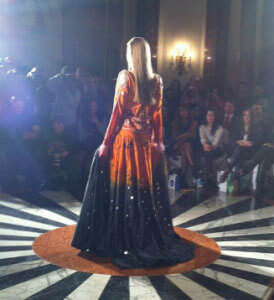 Is digital disrupting the fashion industry?

Looking back at London Fashion Week this September, I’ve enjoyed keeping up to date on what my favourite designers have showcased, and while it’s pouring down with rain right now, I’m already excited for Summer 2016 just so I have an excuse to buy next season’s clothes.

As a self-confessed fashion victim I look forward to this time of year; Fashion Week for me is like CES for the tech industry – brands revealing new products that are set to revolutionise consumers’ lives. This year we’ve seen tech and fashion coming together like never before and the next generation of designers have been building tech into smart products that are both fashionable and functional – yes even that smartwatch that alerts you every time you’ve gained weight.

However, tech has also prompted a change in the Fashion Week’s ethos. Fashion Week used to be a prestigious event that only the elite would be invited to. Now it’s accessible to everyone – whether you’re live streaming a show on your tablet, watching clips on Instagram or gaining backstage access via Snapchat, as designers put social media at front of mind. Burberry, for example, unveiled its Spring/Summer 2016 collection exclusively on Snapchat, effectively opening their show up to a mass audience. But while it’s great that the traditionally snobby and exclusive fashion industry is open to everyone, part of me does feel like that glitz and glamour has been tarnished slightly.

I remember the first time I attended a fashion show at Somerset House (note, I was interning, I wasn’t actually lucky enough to be invited) and the moment I stepped into that room, the buzz was electrifying and the anticipation in the air, well I can’t describe it. But, now we can watch the show in our pyjamas without really experiencing that buzz that the week truly deserves.

Ateliers spend over eight weeks and eighteen hours a day creating one garment and what keeps them going is not just receiving a nod of approval from the designer, but knowing that their masterpiece is going to be published in the fashion bibles such as, Vogue and Vanity Fair. Sadly that isn’t always the case anymore. Images of their creations are now released ahead of the show due to that ‘backstage access’ option on Snapchat and ruined by that Sepia filter. While this is intended– to make it look more ‘edgy’ this frustrates me, as ateliers are not receiving the acknowledgment they deserve. And don’t even get me started on the ‘click to buy’ option that is now available! Remember I mentioned how long designers spend on creating one garment? Well thanks to that ‘click to buy’ option the industry has created a ‘fast fashion’ culture, with high street stores producing cheap, dupe products in a matter of a day – Christian Dior would be turning in his grave right now.

This fast fashion culture makes me wonder whether brands have actually lost control of what they get to showcase during Fashion Week as a result of social media and the pressure for high-street brands to mimic designers’ ensembles, or whether they just need to adapt to technology to keep up with consumer demand to discover and share fast content, anywhere, anytime, on any device.

The fashion industry is known for its elitism and while I might never be personally invited to a show, I do like the idea of the ‘outside looking in’ element that Fashion Week once had. I’m also a bit fed up of seeing the Kardashians at every.single.fashion.show, but that’s a rant for another day (#NotKeepingUpWithTheKardashians). The question I pose today is, and wait for it… Should all forms of communication/social media be banned during Fashion Week? Who knows, maybe the designers who do decide to ban smartphones during their show would create an even bigger buzz and receive the recognition they truly deserve #winning.

Nonetheless, whether you chose to watch the action by smartphone or tablet, in your pyjamas or even on the frow (if you were lucky enough to have been invited), September’s 2015 London Fashion Week has made for some captivating viewing for audiences everywhere.